I’ve written before on topics like kindness, and asking for help, many of those pieces based on my own experience of coping with losing my mum and being homeless all at the same time. I like to think I have learned from those experiences: that I have seen the best in people and, if I haven’t quite overcome my obsession with being independent, I’ve become better at asking for, and accepting, the help of others. Or… so I thought.

As ever, life has a way of making you revisit those lessons you didn’t quite learn the first time around. And so here I am, about to move cities and become – at least temporarily – homeless again, and once more I find myself struggling with the inescapable fact that I can’t do it all alone, and the even more troubling realisation that there is no reason why I have to.

In truth, my situation couldn’t be more different than it was 5 years ago. My finances – although always subject to the freelancers’ wobble – are OK, my business is doing well. I’m more established in my writing, and I’m not poleaxed by the double dose of grief at losing my mum and a close friend in short order. When I moved into my place in Brighton, I didn’t own so much as a table lamp: now, I have a flat full of furniture. I’m moving to a cheaper city where the property market isn’t so brutal, and one where I already have a network of friends and family to support me, if I need it. And yet, what a bloody faff I have had, persuading myself to actually ask any of this large and willing group of people if they will help me out.

It’s ridiculous, on several levels. For a start, almost everyone seems more than happy to help. My cousins have taken a huge weight off my mind by handling my cross-country move (including putting up with my panicked phone calls about what could go wrong) – assistance which they offered, unasked. My neighbours and friends in Brighton and London have rallied round with a dozen little services that have made my life easier, from disconnecting my washing machine to giving me lifts to just buying me lunch so I can save up for my move. Friends in Newcastle have already offered spare rooms and lifts to Ikea, have spent time and effort researching places for me to live, decent estate agents, good neighbourhoods. I realise this is exceptionally lucky: many people have nowhere near this level of support to fall back on. So why do I struggle to accept it?

Weirdly enough, this also ties in with my writing, and my creativity. I’ve written before about how I struggle sometimes to call myself A Writer, fearing I haven’t quite done enough to earn that vaunted title. I often hold back from going for opportunities, pitching for work, or asking for support, because I don’t think I am Good Enough, and I worry that drawing attention to myself will finally expose my shortcomings. Like many people – especially women – I have a megadose of Imposter Syndrome and often feel like the best way to avoid unmasking is to stay as far under the radar as possible. Which is a pretty big drawback in a career where doing a fair bit of hustle is becoming increasingly important, and where you are competing not just on the basis of talent, but against those blessed with the glossy confidence that privilege and access bestows.

And, again like so many women, that spills into my personal life. I don’t want to be a burden. I don’t want to impose. I don’t want my hard-earned title as Independent Feminist Woman undermined by admitting that, hey, yes, I do need help. I don’t want you to pity my aloneness (“shame, isn’t it, that at this age she doesn’t have a husband to help out with this stuff – wonder what’s wrong with her?”) And I definitely don’t want to take the risk that I might ask, and you might say no, and despise me for the very presumption of asking.

So, I am seeing this move, and all the inevitable hassles that accompany it, as an opportunity to remind myself of the lessons I thought – hoped – I had learned 5 years ago, but on which I clearly need a refresher. That I need to be as kind to myself as I would be to others in the same situation (who I would never judge for asking for help, and to whom I would extend what assistance I could). That I need to remember that most people are kind, and good, and helpful, and even those who do say no often do for their own, perfectly valid reasons, that are no reflection on me. (And that even if they are: I’ll survive). That the things that connect us to the world are often the things we do for one another. That give and take is an essential part of everyday life, and refusing to sometimes be on the ‘take’ side of that equation is as selfish in its way as the reverse. If you don’t ever trust others to catch you, what are you saying about them?

Learning to trust in others, and both ask for and accept the help and support they give you, isn’t something you do one time and forget. It’s a muscle, and you should use it often – and, like any other muscle, using it more doesn’t make you weaker. Instead, it makes you strong.

Like my writing? Support it by buying one of my books (or even a t-shirt or bag!) 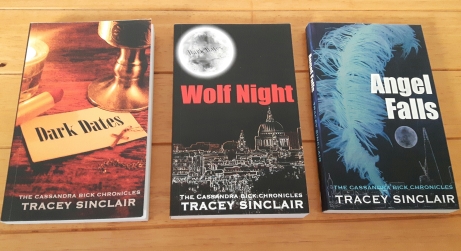