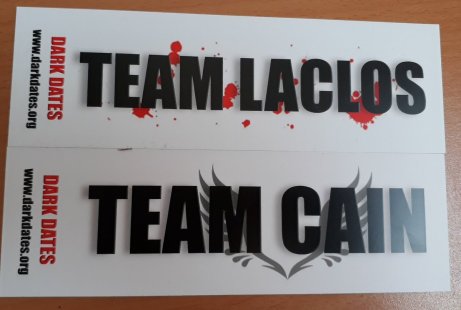 You’ll be glad I asked…

Ok, another Dark Dates 3 drabble – again this might never make it into the book, but the setting is, for reasons that will be explained later, Laclos is hiding out in Cass’ flat, which obviously brings him into close proximity with Cain, who is just delighted about the set up. The idea behind this comes from the fact that Laclos, as a vampire, is utterly self-aware of the clichés surrounding his species, and likes to keep abreast of what the world is saying about them, whereas when it comes to popular culture, Cain is just clueless. (It also sort of references the events in A Vampire Walks into a Bar, but you don’t need to have read that). Obviously if you never watch Supernatural, Buffy or Angel you might not get this…
Here’s what happens when they get left alone for the evening…

I’d been nervous about leaving Cain and Laclos alone together, but as I headed into my flat I was reassured by the lack of sirens, police tape and obvious structural damage, so hoped the evening had managed to be relatively uneventful. As I put my keys in the door, I was about to call out a hello when something stopped me. I’d expected sullen silence or full on shouting, but instead was greeted by the low hum of the TV and a murmur of conversation, a sliver of light coming from under the closed living room door. Curiosity piqued, I crept closer. C’mon, like you wouldn’t want to be a fly on the wall for that conversation?

Laclos smiled at me. “I have been seeking to enlighten your lover as to the weird and wonderful world of human popular culture, or at least as much of it as can be furnished by your DVD collection. I have to say, he’s the most frustrating pupil. I’m starting to think that for all his other talents, he’s actually not that bright.”
Cain scowled.
“Because I can’t understand all this humans romanticising vampires bullshit?”
“What else did you watch?” I asked, morbidly fascinated by this whole idea.
“Well, I did try him on the Vampire Diaries, but he couldn’t bear the teenage angst and I got bored once I realised the two attractive leads, semi-clothed as they so often were, were never going to sleep with one another, so we gave up on that quite quickly.”
“Urgh, Laclos! You know they’re brothers, right?”
“Vampire brothers.”
“No, not vampire brothers… OK, yes, they have the same sire so I guess they are, but they’re human brothers, too.”
Laclos and Cain exchanged a look. Laclos sighed again.
“Sometimes I think humans really don’t understand vampires at all.”
Urgh again. I so did not want to go there.
“Anyway,” he continued, possibly reading my disgusted expression. “We made quite a lot of progress in his education. It’s just a shame you don’t have the DVD of Twilight. I would have quite enjoyed inflicting that on him.”
“Oh, I’ve seen Twilight,” Cain said, and both Laclos and I stared at him, astonished. “What? I wanted to know why all of a sudden there were all these young vamps thinking they could go out in the daylight.”
“And… what did you think?” I asked, my mind boggling at the very thought of it.
“I feel asleep. It mainly seemed to be a lot of moping.” He frowned and took a slug of beer. “I really don’t get human beings, sometimes.”

Dark Dates and Wolf Night are currently available on Amazon.